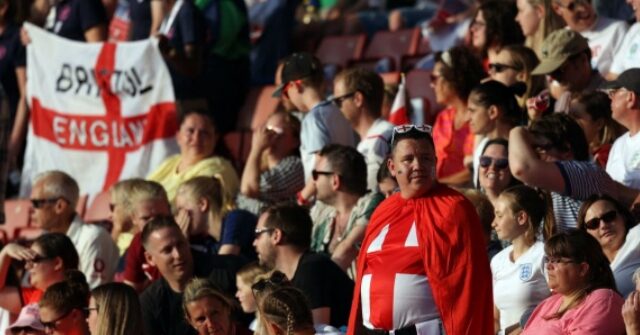 England fans have been dressing as crusader icon St. George for years, but now fans are being warned to leave their chain mail and cross-emblazoned tunics at home for fear that the garb will upset Muslims at the Qatari World Cup.

The warnings come on the heels of a pair of St. George-garbed fans being seen led away by Qatari officials at the World Cup.

It isn’t clear whether the fans were detained or prevented from watching the England vs. Iran game in the stands.

The patron saint is often depicted as a crusading knight on horseback in chain mail and holding a sword. The crusades occurred over several hundred years between 1025 and 1291 when Christian armies fought to free Jerusalem from Islamic control.

But after the video of the fans being led away by security, activist group Kick It Out, a charity campaigning against racism and discrimination in football, is warning England fans not to anger Muslims by dressing as crusaders, according to the Telegraph.

“We would advise fans attending FIFA World Cup matches that certain attire, such as fancy-dress costumes representing knights or crusaders, may not be welcomed in Qatar and other Islamic countries,” the group said in a statement. “Foreign Office travel advice issued before the tournament expressed that fans should familiarise themselves with local customs, and we would encourage fans to take this approach.”

An England fan in Qatar speaks to TalkTV about the treatment of fans at the World Cup.

“What they don't realise in places like Qatar is the fans are the essence of the game. We are what makes football it's not the corporates.”#WorldCup | #TalkTV pic.twitter.com/AQ2uLocGXZ

“Our fans should be mindful that there are things that may cause offence to Qatari citizens, such as openly drinking or wearing historical Crusader Knights Templar outfits that have very negative implications in the region,” Atta said.

Noting that she understands England fans are not wearing the garb specifically to annoy Muslims, Atta added, “However, we firmly believe in the principle that any World Cup should have an environment where fans can be open, enjoy what they want to wear and feel safe and secure. This principle is one that we believe in – though in Qatar, people should just be mindful and aware of deep sensitivities.”

No wars between western crusaders and Muslims ever took place in or near Qatar.