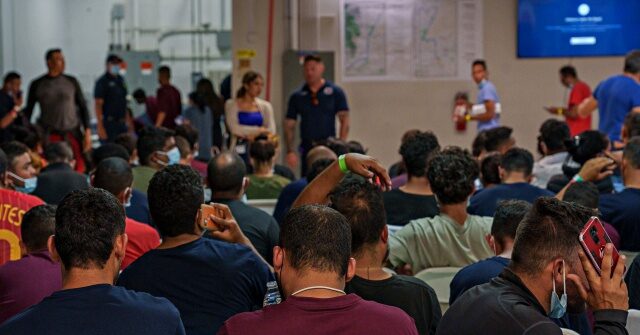 The American Civil Liberties Union (ACLU) is urging President Joe Biden’s administration to shut down nearly all detention of illegal aliens, a plan that would free 30,000 detainees into American cities and towns.

To mark the 20th anniversary of the Department of Homeland Security (DHS), the left-wing ACLU issued a policy brief that asks the Biden administration to end the 287(g) program which allows the Immigration and Customs Enforcement (ICE) agency to work directly with towns and cities to help swiftly turn over criminal illegal aliens.

“Rather than providing any proven law enforcement benefit, these ICE-law enforcement collaboration programs have resulted in racial profiling: Local police are emboldened to stop, arrest, and bring low-level charges against people who ‘look’ like immigrants, with the actual aim of helping ICE deport them,” the ACLU brief states.

Biden’s DHS Secretary Alejandro Mayorkas has already suggested that the administration is working to gut the 287(g) program.

In addition, the ACLU is urging Biden to eliminate most immigration detention centers across the U.S. that are contracted by ICE. Such a plan would free roughly 30,000 illegal alien detainees into American cities and towns.

Nearly 9,000 of those detained illegal aliens are convicted criminals or have pending criminal charges against them.

“With its coffers running dry, ICE should be ending private prison contracts, shuttering abusive detention sites, and supporting community-based alternatives to detention that enable immigrants to navigate the immigration system and fairly make their case for protection from deportation,” the ACLU brief reads.

John Binder is a reporter for Breitbart News. Email him at [email protected] Follow him on Twitter here.