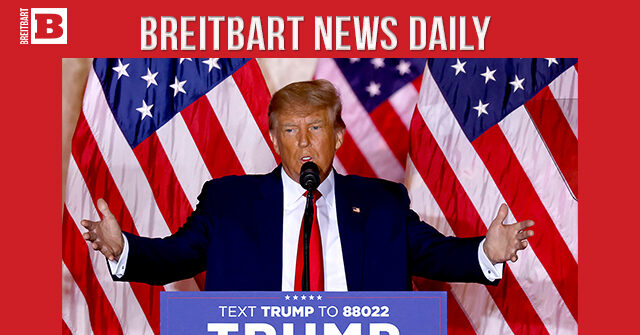 Breitbart’s Jerome Hudson, filling in for host Alex Marlow, opens today’s podcast with House Republican Leader Kevin McCarthy’s ultimatum to Biden’s Department of Homeland Security Secretary Alejandro Mayorkas: resign or face impeachment. Other headlines in Jerome’s monologue include Dr. Anthony Fauci’s disastrous last press conference at the White House, which Biden Press Secretary Karine Jean-Pierre somehow managed to make worse. The alleged mass shooting suspect who is accused of killing five people and wounding at least 18 others at an LGBTQ nightclub in Colorado reportedly identifies as “non-binary” and uses “they/them” pronouns. A major Biden failure is looming again in the form of a potential rail strike that could shut down some passenger and freight transportation. And tomorrow’s Thanksgiving is officially the most expensive on record. Our guest today is Liz Harrington, the spokeswoman for the Trump 2024 campaign. She details how Donald Trump plans to win back the White House. Jerome asks her if Trump is willing to fight the left on their own turf and win over voters who have been taken for granted in deep Democrat-run areas.

The Breitbart News Daily Podcast runs Monday through Friday as a “Director’s Cut” of the SXM Patriot radio show. Hosted by Breitbart Editor-in-Chief Alex Marlow, you’ll hear Alex’s take on the big political stories, interviews with various newsmakers, and the Patriot “Caller of the Day.”

SUBSCRIBE for free by clicking your preferred podcast platform below.