Comedian Trevor Noah shocked his audience on Thursday with a pre-show video announcement declaring that his time at “The Daily Show” had come to an end.

The late night show — which airs five nights a week on Comedy Central — shared a video preview of that evening’s monologue just an hour before the show was scheduled to air. In the monologue, Noah revealed that he was leaving the show after seven years.

“The journey we have been on together has been wild,” he said, noting that it took a lot of producers and correspondents and moving parts to make the show come together successfully every night. “And I want to say thank you to the audience, for an amazing seven years, it’s been wild. It’s been truly wild.”

The audience exploded in applause and cheers then, and after a long pause, Noah continued. “I remember when we first started … so many people didn’t believe in us, it was a crazy bet to make, I mean, I still think it was a crazy choice … what a journey it’s been.”

“I just found myself filled with gratitude for the journey,” Noah added, listing off a number of events that had come about during his time behind the desk.

“I realized that after the seven years, my time is up,” Noah said then, prompting several audible gasps from the audience. “Yeah, but in the most beautiful way, honestly. I’ve loved hosting this show. It’s been one of my greatest challenges, it’s been one of my greatest joys, I’ve loved trying to figure out how to make people laugh even when the stories are particularly s***y on the worst days. You know, we’ve laughed together, we’ve cried together.”

“But after seven years, I feel like it’s time,” Noah said, going on to note that one of the things he had really missed was traveling to do stand-up — and he hoped to be able to get back to that.

“I’ve never been good at goodbyes,” he concluded, quickly reassuring the audience that he wasn’t going to drop off the face of the earth. “It’s not instant, I’m not disappearing, don’t worry. If I owe you money, I’ll still pay you.” 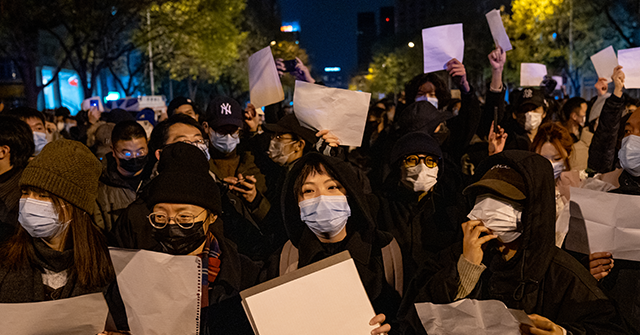 ‘Not Taking a Side’ on Cause of China Protestors, We Support Right to Protests and Don’t Believe Lockdowns Work

‘Not Taking a Side’ on Cause of China Protestors, We Support...