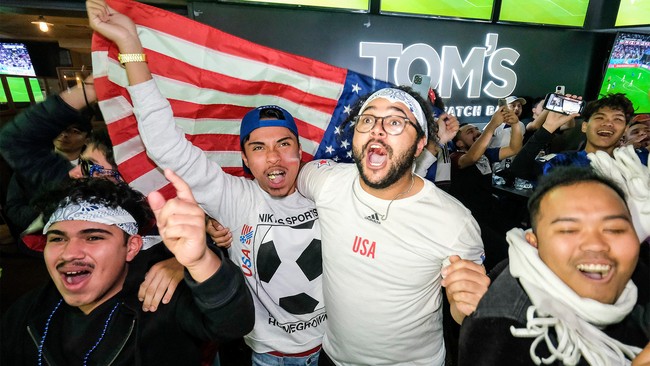 I’m not a big soccer fan which has been a challenge living and raising my children in Israel where soccer is so central. My father was born here, and he loved soccer, but it seems to have skipped a generation.  Nevertheless, I was enthralled watching the US soccer team competing against the Iranian soccer team at the World Cup in Qatar this week. It was symbolic if nothing else, but increased my appreciation for the sport and the players.

Given the history the US has in and with Iran going back to Iran’s Islamic revolution in 1979, followed by the hostage crisis in November that year when the US embassy was stormed and 52 Americans were taken hostage for 444 days, I tend to side against Iran from the get-go.  Since then, Iran dubbed the US the Great Satan and Israel the Little Satan, and has made no secret of its intent to destroy Israel with a nuclear weapon.  Years of inept US-led negotiations with Iran to try to prevent their drive for a nuclear weapon have not only not been successful but have left me more jaded about the murderous intent of Iran’s Islamist regime.

How could I not watch the match, pitting the “Great Satan” vs. the little Evil Empire, the greatest world sponsor of terror. It was not going to settle the Iranian nuclear drive or the evil brand of Islam behind it, but it was compelling.   Sitting in the Judean mountains, the original Bible Belt, I had a number of observations as the US routed Iran 1-0.

Before tuning in I was impressed and inspired by the Iranian team standing silently during the playing of their national anthem before a previous match.   How bold it was on the world stage for them to join the protests engulfing Iran these past months.  How dangerous for them, too.  Clearly it was not spontaneous, and clearly the Iranian regime would not tolerate it again.  Word is that the Islamist regime threatened the teams’ family members back at home.  There’s nothing like the threat of imprisonment and torture to motivate an athlete, much less a team of them, to play hard for their country.

Unfortunately, the Iranian regime’s threats worked, and the team sang its anthem before subsequent matches, including the one against the US.  Iranian regime – 1, Iranian soccer team – 0.

Watching the Israeli broadcast, I was impressed with how much the announcers knew about the Iranian team and its players.  It struck me that as professional as they were in announcing the politically charged match, had it been an Israeli team playing, the game would not have been allowed to be broadcast in Iran.  Had there been an Israeli team competing against an Iranian team, the Iranians would likely not have allowed their team to compete against Israel, the “Little Satan,” as they have required of athletes in other sports.

I was entertained by the Israeli announcers’ use of Hebrew phrases as they highlighted the action.  After one missed goal, I think, it was funny to hear the announcer say, “Oy, oy, oy.”

One of the announcers was a woman.  That impressed me because of course Iran would never allow that.  Speaking of women, I was interested that as the cameras panned the Iranian fans replete with their faces painted with the Iranian flag, some of them were women, and some had their hair uncovered.  It was the Iranian Modesty Police arresting and murdering a young woman whose hair was showing that ignited the current protests engulfing Iran. Ironic how female Iranian fans were cheering on their team with their hair uncovered, something that at home would have them arrested, assaulted, and even possibly murdered.

Then again, that there were women present at all was significant. If I understand correctly, women in Iran are not allowed to attend sporting events. Period. Who’d ever have thought that they’d find relative freedom in “liberal” Qatar that does not allow alcohol to be served, or freedom of religion for non-Moslems.

I was impressed that the match took place on November 29, the 75th anniversary of the UN resolution to restore Jewish sovereignty to the Land of Israel. While there were good relations between Iran and Israel before the Islamic revolution, in 1947 Iran voted against the creation of a Jewish state in the Land of Israel.

Before the match, US team captain Tyler Adams was chided at a press conference by Iranian journalists for mispronouncing Iran, for which he had the class and humility to apologize.  Then, he was questioned about how he felt (as a black man) representing a country “that has so much discrimination against black people.”  Regarding American racism, his response was honest that “the US (is) continuing to make progress every single day.” That was classy, a great way to represent the greatness, albeit imperfectness, of the United States.

Watching the match, the insincerity of the reporter’s question was highlighted as the multi-ethnic American team took the field.  There were black men and white men, men with dark, blond and even red hair. Their names depicted that some were immigrants and others possibly the descendants of slaves.  While not representing the full gamut of American society, they were diverse.  As the match went on, it was clear that they played together as a team, as Americans mostly do despite differences.   The Iranian team was far from diverse: all Persian men with dark hair. I don’t know how many were Sunni as compared to the Shiite majority, but I doubt any represented the Azeri, Kurdish, or other minorities.  It’s not the first time an Iranian (journalist or otherwise) was insincere, but it was noted on the field.

As the match wound down and it was clear Iran was going to lose, which meant being eliminated from competition, a few thoughts came to mind.  Did the team or any of its members not play their best for the symbolism of Iran losing to the US?  What would happen with the team now?  Would they go home and risk arrest, or just being shot for not singing their anthem?  Would they race to the US embassy (irony) in Doha and seek asylum?

It was a good, well-played match.  I’m glad I watched.  It was filled with symbolism that mirrors much of what’s going on with Iran in the rest of the world.  Perhaps by the next World Cup, the Iranians will successfully overthrow their oppressive Islamist and terrorist leadership, and bring a team to the US where they can participate freely, and proud of the country that they have every right to be proud of, minus its leaders and their evil theology.